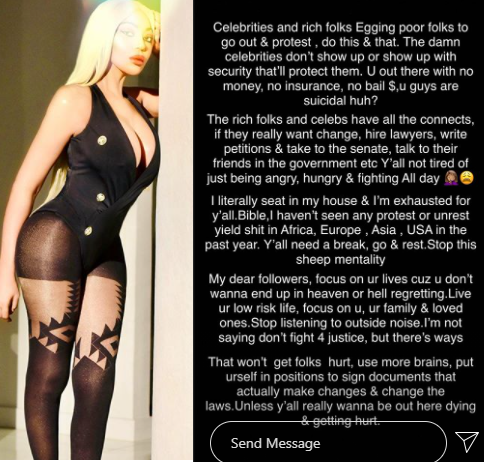 Dencia has criticized ”poor” Nigerians who have taken to the streets to protest SARS brutality while calling on the government to end the Special Anti-Robbery Squad, SARS.

The singer said celebrities and rich people have the resources and connections to effect change but they aren’t doing that, instead, they are encouraging poor people to go out and protest.

She accused the people protesting of having a “sheep mentality” and told them to focus on their lives because their protests will not have an effect, instead it could end in their death.

She wrote: “Celebrities and rich folks egging poor folks to go out & protest, do this & that. The damn celebrities don’t show up or show up with security that’ll protect them.

“You out there with no money, no insurance, no bail money, you guys are suicidal huh?

“The rich folks and celebs have all the connects, if they really want change, hire lawyers, write petitions & take to the senate, talk to their friends in the government, etc.

“Y’all not tired of being angry, hungry & fighting all day.

“I literally seat in my house & I’m exhausted for y’all bile. I haven’t seen any protest or unrest yield shit in Africa, Europe, Asia, USA in the past year.

“My dear followers, focus on your lives cuz you don’t wanna end up in heaven or hell regretting. Live your low risk life,  focus on you, your family & loved ones. Skip listening to outside noise. I’m not saying don’t fight for justice, but there’s ways that won’t get folks hurt.

“Use more brains and put yourself in positions to sign documents that actually make changes & change the laws. Unless y’all really wanna be out here dying & getting hurt.”